At Africa Hall, scores gather to pay homage to the legacy of a great African, a global icon

Addis Ababa, 24 August 2018 (ECA) – As tributes continue to pour from around the world, the United Nations family in Ethiopia, as well as representatives from the government of Ethiopia and the diplomatic corps gathered in Africa Hall today to honor former Secretary-General Kofi Annan, who passed away on 18 August, at the age of 80.

“He was a noble defender of humanity, the symbol of great authority and wisdom in the public and private spheres.  A voice for the vulnerable.  An inspiration for youth.  In the face of adversity, he remained a beacon of hope.,” said Economic Commission for Africa’s Executive Secretary Vera Songwe.

She elaborated on his numerous achievements, including efforts to revitalize the United Nations. “He was the first Secretary-General to champion Road Safety, which is an issue in many countries, she said, adding: “His tenure was hardly without debate or criticism, but he also acknowledged his failures and limitations.”

Speaking on behalf of the Government of Ethiopia, State Minister in the Ministry of Foreign Affairs, Afework Kassu said, “He made us all African proud by his tireless service for the cause of peace, sustainable development, the rights of women and above all by being the staunch vanguard of the UN Charter.”

The Ghanaian Ambassador to Ethiopia, Amma Adomah Twum-Amoah paid her respects to Kofi Annan, reminding the gathering of his humanity and humility.

George Okutho, ILO director for Ethiopia, Djibouti, Somalia, Sudan and South Sudan described the late Kofi Annan as “one of Africa’s great sons and an international leader who has been a remarkable advocate for a more peaceful a prosperous and just world.”

The Deputy Chief of Staff at the African Union elaborated on the efforts made by Kofi Annan in strengthening the AU-UN relationship.

For her part, Emelie Rennerfelt, Swedish Embassy Counsellor spoke warmly of Kofi Annan and his Swedish wife’s warm relationship to the Swedish people and his legacy, which personified global leadership.

Ali Todaro, a UN Staff member who worked with the late Kofi Annan on numerous occasions remembered him as “a man with warm personality and pleasant demeanor.”

“He was described in one obituary as an “international rock-star of diplomacy.”  But we the staff will also remember the international statesman for his humility, for being extremely personable, and for treating all people with respect.  In such a hierarchical organization as ours, it is refreshing to encounter a leader with such qualities, who was so down to earth, kind and caring of others – regardless of rank,” he added.

Wondimu Alemayehu, who worked with Kofi Annan in the late 60s in Ethiopia when he was Chief of Personnel at the ECA remembered him with great admiration as a passionate man who empowered the staff to dream.

A one-minute of silence solemnized the occasion and long after the end of the ceremony, many lined up to sign the book of condolences.

“To live is to choose. But to choose well, you must know who you are and what you stand for, where you want to go and why you want to get there.” Kofi Annan.

May He Rest in Peace

The ceremony in Pictures 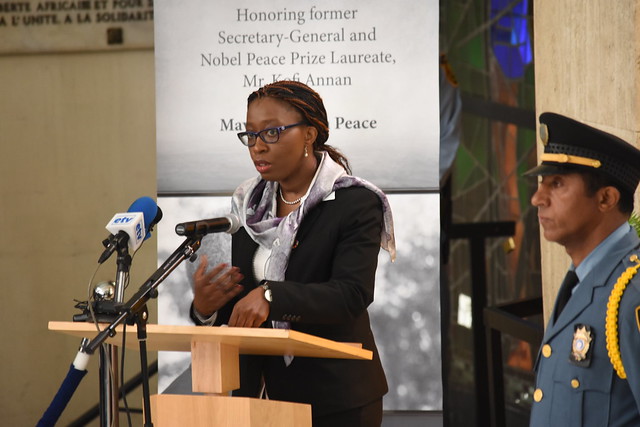 Urgent Appeal to Stop Use of Rape and Violence Against Women

Urgent Appeal to Stop Use of Rape and Violence Against Women as War Tactic by Ethiopian Military Forces. by Belletch Deressa, PhD The aim of this...
Read more