ESAT TV is among a year in fake news in Africa

November 12, 2018 (BBC Africa) — The spread of fake news in Africa has been blamed for igniting ethnic violence, sowing confusion among voters and even causing currency fluctuations. As the BBC launches major new research into fake news in Africa, we break down five false stories that made a big impact on the continent in the past 12 months.

The spread of fake news in Africa has been blamed for igniting ethnic violence, sowing confusion among voters and even causing currency fluctuations. As the BBC launches major new research into fake news in Africa, we break down five false stories that made a big impact on the continent in the past 12 months.

What was the story?
When Atiku Abubakar was confirmed as a presidential candidate for the Nigerian elections in 2019, a fake Twitter account in the name of the opposition leader posted a message thanking the “Association of Nigerian Gay Men (ANGAM)” for its support.

I want to thank the Association of Nigerian Gay Men (ANGAM) for their endorsement of my Presidential ambition. This means a lot to me, and to other men of queer affiliation. I assure them that on getting to office one of the first things I would do is to abolish the anti-gay law.

In the post, “Mr Abubakar” writes that the first thing he would do if he were to become president would be to scrap the country’s controversial anti-gay legislation, signed into law by former Nigerian President Goodluck Jonathan in 2014.

Homosexual acts are punishable by up to 14 years in jail in Nigeria, while gay marriage and displays of same-sex affection are also banned. 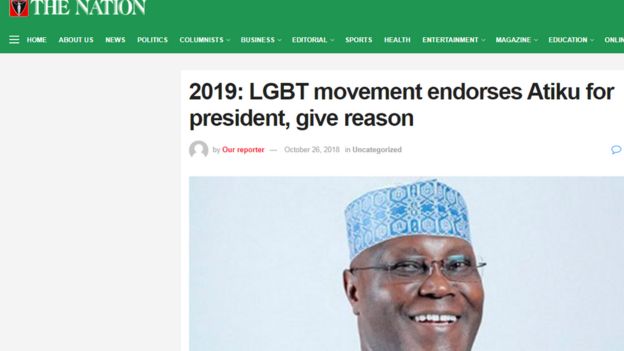 A screengrab of the fake news story from a Nigerian blog

After originally being shared on Twitter on 14 October, the story was picked up by two Nigerian blogs. Then 12 days later, two prominent Nigerian newspapers, The Nation and the Vanguard, both published stories with a very similar theme.

They reported that an LGBT organisation called “Diverse” was also backing Mr Abubakar for president, considering him a truly “liberal candidate”.

A fake news story about a presidential candidate advocating for gay rights could be used to undermine them. Highly influential Muslim and Christian leaders in Nigeria, who were united in their support for the anti-gay legislation, could tell their followers not to vote for such a candidate.

There is also no evidence that the LGBT rights organisations quoted in the initial tweet, or the subsequent blogposts and newspaper articles, even exist. There are no official records of the organisations themselves, which would be illegal under Nigerian law anyway.

And neither they nor their purported spokesperson (Spinky Victor Lee) existed online before the emergence of the first tweet in October, as detailed in this fact-check by the Agence France Press (AFP) news agency.

CNN business presenter Richard Quest was in the Kenyan capital Nairobi in October filming for his TV show.

Former news anchor and media personality Julie Gichuru posted on her Twitter account on 25 October to discuss how much Mr Quest was apparently enjoying his time in Kenya.

She posted the following quote, attributing it to Mr Quest.

“Nothing beats the service industry in Kenya… Here I am surrounded by giraffes while having breakfast! In a country declared by the World Bank as the Preferred Investment Destination in Africa, what else can I ask for? KENYA IS MAGICAL!”

Julie has over a million followers on her verified Twitter account and 600,000 on Instagram, so within minutes thousands of people had seen what she had posted and believed it to be true.

Many poked fun at her for falling for a hoax given her high profile and her long career in the media industry.

The CNN journalist came across Julie’s tweet and was quick to point out that he hadn’t made any such statement. He replied to her original post.

Ahh Julie…. a nice pic and sentiment. But I never actually said that! (Even though I am having a very good visit)

785 people are talking about this

Ms Gichuru then had to go on Twitter to set the record straight to her followers, issuing a retraction and deleting her initial tweet.

Ok, I am fanning out right now @richardquest

Pole sana Richard, thought it was a real quote

challenges of the digital era.
Enjoy Kenya, it is Magical

93 people are talking about this

In July, the US-based Ethiopian Satellite Television (ESAT) station broadcast a video which it said showed ethnic Oromos in Ethiopia pushing the bodies of ethnic Somalis into a shallow grave.

It claimed that the footage was taken in Ethiopia’s Oromia region, where there has been deadly violence between the two groups this year.

The BBC’s Afaan Oromo language service reported that the broadcast and subsequent widespread circulation of the video on social media in Ethiopia resulted in deadly attacks on ethnic Oromo people living in neighbouring Djibouti and Somalia.

Oromo refugees in neigbouring Djibouti told the BBC that they had been beaten and their shops looted after the video was aired there.

After an uproar on social media with many questioning its authenticity, ESAT admitted that the video was not real and described it as “deliberately misleading” in an official apology on its YouTube channel.

The same unverified video had been widely shared in June on social media in relation to the current conflict between Anglophone separatists and the government in Cameroon, some 3,000km (1,800 miles) west of Ethiopia.

The video aired on ESAT TV had apparently also been doctored, with audio of what were supposedly Oromo youths chanting inserted on top of the video’s original sound.

On 12 February, a correspondent for South Africa’s national broadcaster SABC reported that then-President Jacob Zuma had agreed to resign.

Citing “authoritative sources”, Tshepo Ikaneng broke the story during a live report outside a high-level meeting of members from the ruling African National Congress (ANC), who were discussing his future.

Another South African journalist uploaded the announcement on Twitter. 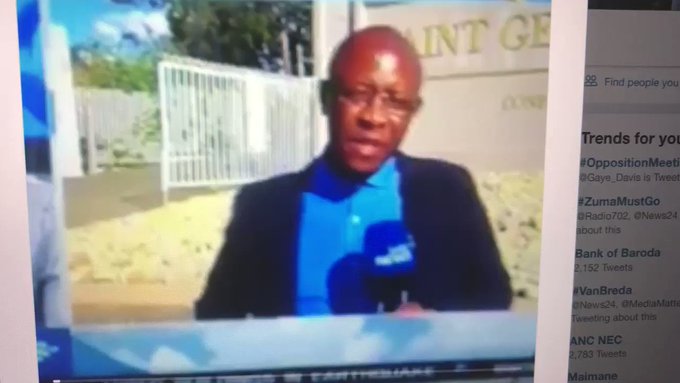 #ANCNEC #ZumaExit This is the video where SABC Journalist Tshepo Ikaneng says Zuma has agreed to be recalled. #Zuma Video: @AdriaanBasson

Mr Zuma had been under immense pressure over multiple corruption scandals and had faced repeated calls from his party to step down.

The country was waiting on news of his possible resignation.

The South African rand, which had gained about 1% on the expectation that Mr Zuma would resign on 12 February, gave up some of its gains after the spokesman dismissed the SABC report. 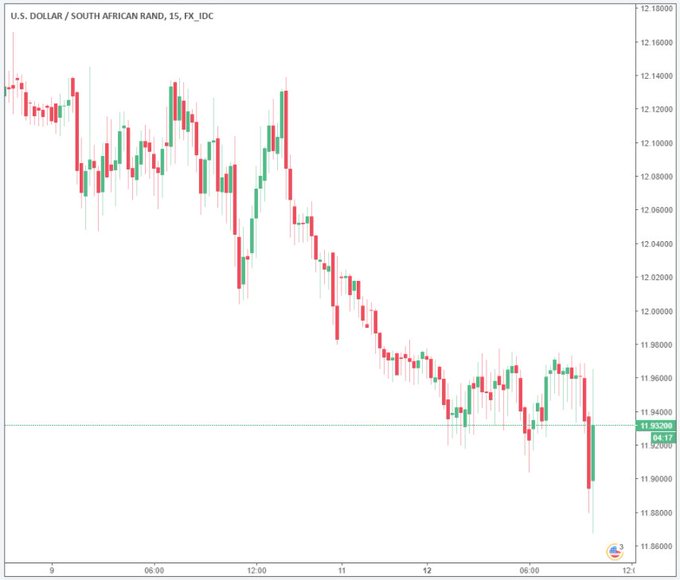 Do we know it was fake?

Mr Zuma’s spokesperson came out to deny the reports, saying they were “fake news”.

An article claiming Tanzanian President John Magufuli had told men to marry more than one wife as a way to end prostitution went viral.

It said that the president had addressed a “conference of about 14,000 men” telling them that “out of approximately 70 million Tanzanians, 40 million are women and only 30 million are men.”

This scarcity of men was leading to an increase in prostitution and adultery among women, the article claimed the president had said.

The initial story published in the English language Zambia Observer website in February 2018 didn’t create much of a stir.

But it was only when it was published in Swahili, the national language of Tanzania, on a website called nipasheonline.com that the story really started to gain momentum.

From there it was posted on the popular JamiiForums website, where it became a hot topic of discussion and spread to other news websites in Kenya, Zambia, South Africa and Ghana.

Tanzania’s official government spokesperson condemned the story on Twitter in Swahili, saying the president never uttered such remarks and people should ignore them.

A fact-check by BBC Swahili exposed further reasons we know the article was untrue.

In the fake article, “Mr Magufuli” refers to a population of 70 million, with 10 million more women than men.

But the latest UN estimates put the total population of Tanzania at just under 60 million, with no substantial gender disparity.

The website where the fake article was posted may also have sounded familiar to readers of the prominent Tanzanian newspaper Nipashe.

But it has no connection to the real website for that newspaper, whose official home on the web is https://www.ippmedia.com/sw/nipashe.