HAMDAYET, Sudan — The refugees were hungry and exhausted, their shoes dusty and worn from trudging for four days through the bush and forest of northwestern Ethiopia, hiding from soldiers, as they escaped the conflict in the country’s Tigray region.

Finally, they made it safely to the small Sudanese border town of Hamdayet. But they had nowhere to sleep and nothing to eat. So they sat in a sandy alley close to the center of town, asking passers-by for food and water.

That’s where Mohamed Ali Ibrahim, who works in a local restaurant, found them.

He led them to his family’s compound near the alley, and invited them to stay in an empty mud hut on the property. He told them they could stay for as long as they wanted.

“They are like our brothers,” said Mr. Ibrahim, 64, of the group of four women and one man — members of two families who were neighbors in Ethiopia. “We have not given them a time limit and we cannot do that because these are people coming to us for refuge.

Since Prime Minister Abiy Ahmed of Ethiopia ordered a military offensive against the leaders of the restive Tigray region in early November, more than 61,000 Ethiopians have crossed into Sudan, according to the United Nations refugee agency. More than 43,000 of those refugees have crossed the Tekeze River into Hamdayet, a remote and tranquil town in Sudan’s eastern Kassala state. 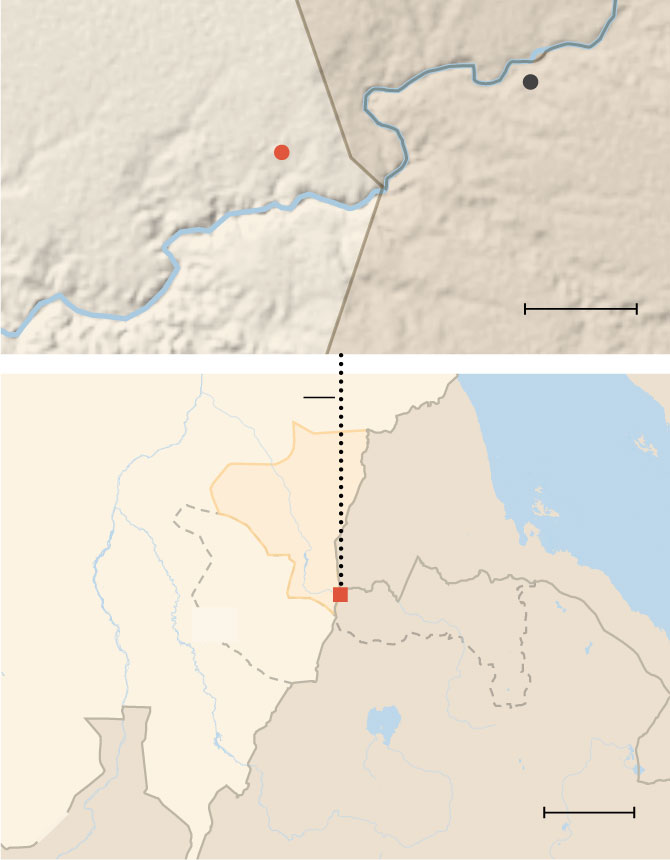 The refugees, including hundreds of children who arrived unaccompanied, said they had fled indiscriminate shelling, killings and looting, and saw dead bodies along the way.

“We were fearing for our lives,” said Laul Zerabruk, one of the Ethiopians who found refuge with Mr. Ibrahim, as he recounted his journey one recent afternoon.

Mr. Laul, 48, had worked as a guard at a bank in Humera, a town in Tigray, and fled with his wife and daughter, along with two neighbors, after shelling began.

“The Sudanese gave us a very good welcome,” he said, sitting near his temporary home, with its thatched conical roof. The smell of coffee and incense wafted from inside. “Sudan is like our second mother country. They have done everything they can.”

After crossing to Sudan, Mr. Laul said, the terror of the odyssey subsided, but he was still plagued with worry about four siblings left behind and what might have happened to his family home.

While the United Nations has moved most of the refugees to camps deeper in Sudan, some Ethiopians have lingered in Hamdayet, holding onto the hope of returning home soon. But they have also stayed, they say, because Sudanese families like Mr. Ibrahim’s have opened their homes — and hearts — to them, sharing food, fire and even money.

And yet the Sudanese and Ethiopian refugees aren’t bound by much beyond geographical contiguity, with plenty of differences that could divide them.

The Sudanese in Hamdayet are Muslim, Arabic-speaking traders and livestock herders while the Ethiopians are Tigray or Amharic-speaking farmers who mostly practice Christianity, with many of them sporting crosses tattooed onto their foreheads.

Mr. Ibrahim, who was sitting near Mr. Laul that afternoon, said the town’s residents felt a collective responsibility to help the refugees.

“The people in this area did their best, whether it is by providing food, drinks and clothes,” Mr. Ibrahim said. “We are doing this for the sake of Allah.”

The influx of refugees has transformed Hamdayet from a sleepy hamlet with no electricity lines or running water into one thronged with humanitarian workers, journalists and security officers.

Every morning, as young Sudanese boys and girls descend to the river to collect water in leather bags and jerrycans mounted on donkeys, they are joined by Ethiopian refugees washing in the river.

Numerous small shops serving coffee and sweet tea have also sprung up, with young refugees, mostly men, congregating to discuss the situation back home and listen to Ethiopian music and perform a traditional shoulder-shaking dance.

At the town’s only market, some Ethiopians have found work hawking bananas and grapefruit under the scorching sun while others linger around restaurants waiting to be handed leftovers.

Sudan has been battered by an economic crisis besides bread and fuel shortages. For people there to open their homes to fleeing refugees is “heartening, life reaffirming really,” said Will Carter, the Sudan director for the Norwegian Refugee Council, who has visited Hamdayet.

“The first line of support for refugees are not authorities or aid agencies, but really are local — usually impoverished — communities, everyday citizens,” he said.

Hassina Mohamed Omar was housing three refugees at her home, while her next-door neighbor had taken in five. Ms. Omar, 40, said her father used to go to Ethiopia to trade, and at one point, she had a sister who lived there. As the Ethiopians arrived, she said she felt a duty to assist however she could.

“We must empathize with one another,” she said. “They knocked on our door and said, ‘Do you have space?’ And what do you do? You house them.”

Thomas Weldu, a 23-year-old university student who was visiting family in Humera when the war began, is staying with Ms. Omar.

He had previously visited Sudan with his mother, a businesswoman, who traded Ethiopian teff, a type of grain, for clothes and shoes. During his earlier experiences, he said, he had found the Sudanese people to be “the most generous people in the world.”

“We knew we would be welcomed here,” he added.

But some Ethiopians say that some in town have hinted that it might be better if they moved on to refugee camps so that they don’t put a strain on limited resources.

“There’s only so much that families can support you and give you food, water or space,” Mr. Thomas said. “And they are right. The Sudanese economy in itself is not stable. They have their own problems.”

In recent months, Ethiopia and Sudan have clashed over the al-Fashaga agricultural area, which is within Sudan’s eastern Gedaref state but has historically been populated by Ethiopian farmers.

Sudanese officials said in January that Ethiopian warplanes had crossed into their country’s airspace and accused Ethiopian militias of killing civilians. Ethiopian officials have accused the Sudanese armed forces of occupying and plundering farms in al-Fashaga, even as the two nations said they had agreed to resolve the border dispute through negotiations.

Tension has also risen at the Hamdayet border crossing in the past, with refugees claiming Ethiopian forces blocked them from crossing into Sudan.

But in Hamdayet, the Sudanese who are welcoming refugees from Tigray said they will continue to do so.

“We are neighbors,” said Harun Adam Ibrahim, 51, whose family at one point hosted about 20 people in his compound. “We are brothers.”

Comparing the two Sudanese and Ethiopians towns as one, he said, “Hamdayet is like Humera and Humera is like Hamdayet.”

Despite the warm welcome in Sudan, many Ethiopian refugees yearn for peace so they can go home. But that is not looking promising.

Even though Mr. Abiy, Ethiopia’s leader, has declared victory in the fight, clashes in the region have continued. Health facilities have been damaged and food is scarce, leading the United Nations Secretary General, António Guterres, to say earlier this month that he was “seriously concerned.”

Mr. Thomas, the university student, said he wanted to use his time in Sudan to improve his Arabic skills, find a job with a nongovernmental organization and hopefully move to Sudan’s capital, Khartoum.

But he added that he dreads thinking about being absent from his university graduation and that he misses being among his friends, recording rap videos.