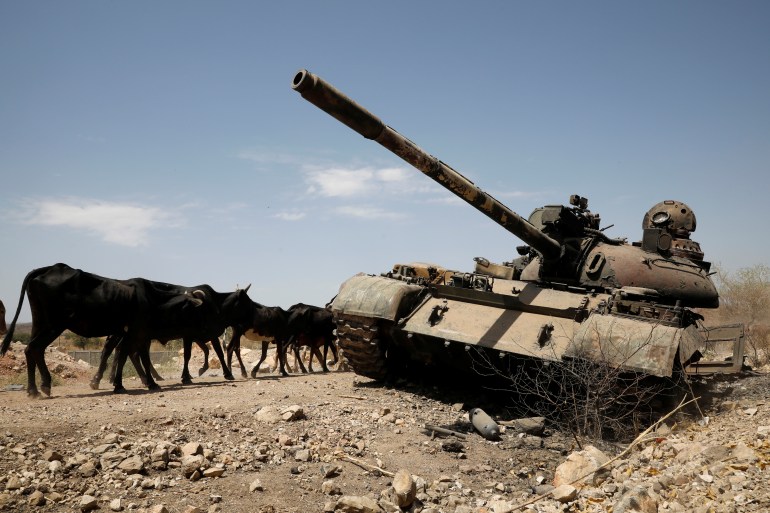 Forces from Ethiopia’s northern restive Tigray region said on Monday that they were pushing south and had recaptured a town from government forces, underscoring their determination to keep fighting until the region’s prewar borders are restored.

The Reuters news agency was unable to independently confirm the claim because communication links to the region are down.

The government declared victory three weeks later when it took the regional capital Mekelle, but the fighting continued, leaving thousands of people dead and nearly two million forced from their homes.

But on June 28, the TPLF announced the recapture of Mekelle and now claims to control most of Tigray, home to seven million people.

A former resident of Korem now living in the capital Addis Ababa told Reuters that a family member fleeing their home had reached an area with cell service and confirmed fighting.

Ethiopian military spokesman Colonel Getnet Adane did not comment on who was in control of the town but said in a text message, “we had declared a ceasefire,” referring to a unilateral ceasefire declared by the Ethiopian government after its troops pulled out of Mekelle. The TPLF has called the ceasefire “a joke”.

A spokesperson for Prime Minister Ahmed and the head of the government’s task force on Tigray did not respond to requests for comment.

The conflict has forced nearly two million people to flee their homes.

Early last month, the UN said at least 350,000 people in Tigray faced famine. The US Agency for International Development last week estimated the number at 900,000.

Here it comes! 🚚🚚🚚 #HappeningNow the first humanitarian convoy to enter #Tigray for two weeks is arriving into #Mekelle!@WFP needs to continue delivering 1000 metric tons of life-saving food on 40 trucks a day to #Tigray to meet the emergency food needs of 2.1 million people pic.twitter.com/I5jREgbdUm

“WFP need to continue delivering 1,000 metric tonnes of life-saving food on 40 trucks a day to Tigray to meet the emergency food needs of 2.1 million people,” the UN agency posted on Twitter.

Major roads into Tigray have been blocked by government forces and their allies and at least two bridges destroyed.

Ethiopian authorities have denied blocking aid to Tigray and said they are rebuilding infrastructure.

The European Union’s foreign policy chief Josep Borrell said on Monday that the bloc should be ready to use sanctions on Ethiopia as a way to push for peace and humanitarian access in Tigray.

“The option of restrictive measures must be on the table,” Borrell told a news conference after a meeting of EU foreign ministers that discussed the conflict, using EU parlance for economic sanctions, travel bans and asset freezes.

Meanwhile, US State Department spokesman Ned Price on Monday said that Washington was “gravely concerned” by reports of hostilities in western Tigray and evidence of escalating military conflict.

“Escalating fighting will undermine critical ongoing efforts to deliver humanitarian relief to families affected populations and tiebreak,” he said at a press briefing.

Price warned that any effort to change the internal boundaries of Ethiopia by force would be “unacceptable”.

“Any issue of such national important importance, like borders, would be an issue for the Ethiopian people to decide, through consensual dialogue, not by the barrel of a gun,” he added.